This is the second of a three-part series on Iliotibial band (ITB) pain. ITB pain is common in runners - even I've had it! The good news is that this tricky injury can be managed. In Part 1, the cause/s of ITB pain were discussed. Here in Part 2, we begin our look at treatment!

This blog provides an update on the literature around the treatment of runners with ITB pain. It is not medical advice. If you have knee pain with running book in to physio here!

How do I treat my ITB pain?

Here is a brief summary of injury rehabilitation:

Yep, I went to uni for four years when this is all they needed to tell me. (Okay, there's a little more to it, but not much). 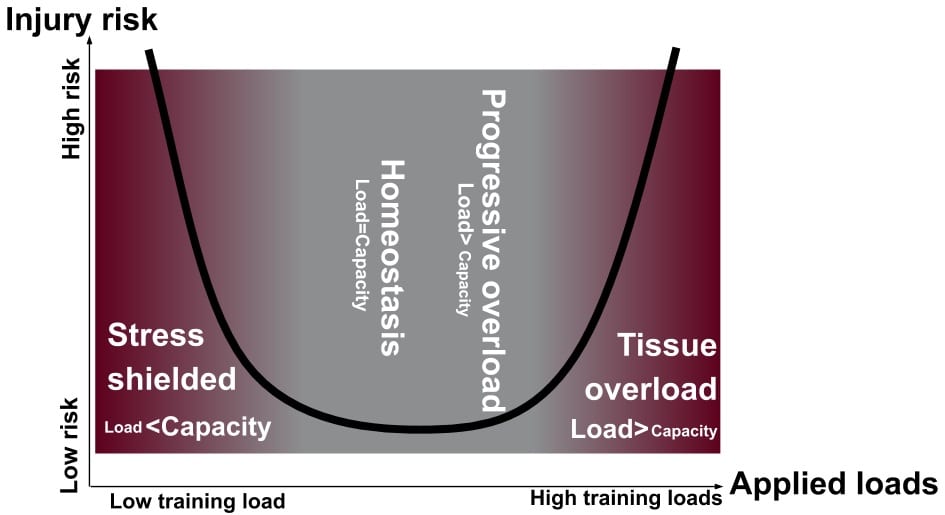 Take a minute to appreciate the figure above. There are two pitfalls to be avoided: doing too little (stress shielding) or doing too much (overload) - not rocket science I know! A well-designed rehabilitation program will aim to progressively overload the ITB to gradually restore tolerance to loads like running, weights etc. If you do too little, the chance of re-injury can be just as high as if you overload the tissue! Unfortunately, many physios and runners fall into the stress shielding trap in an effort to reduce ITB pain without actually increasing the capacity of the tissue to tolerate load. (12)

But what about foam rolling!?

We know foam rolling is very often advised for treating ITB pain, and our neglection of it is not a mistake or oversight on our part!

Here's what we know: it doesn't change flexibility for more than a few minutes (22), doesn't provide any lasting pain relief (??) and it doesn't break up or "release" adhesions in the connective tissue or myofascia.

Moreover, if ITB pain is a compression injury, then the last thing we should do is add more compression to the lateral knee! 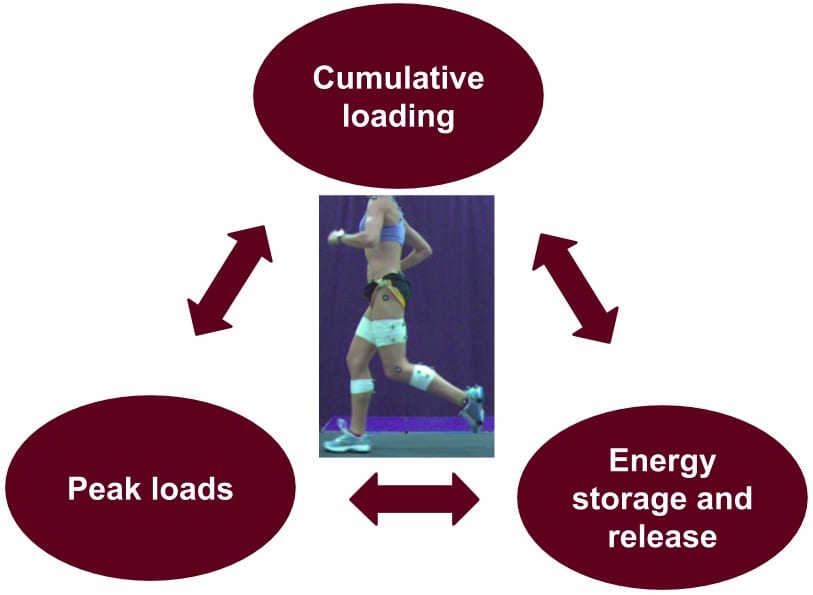 There are three types of loads are experienced when we run and each must be appropriately addressed in a successful rehabilitation program:

There are two main stages for rehab: a pain dominant phase and a load dominant phase. These phases work on a "protect" vs. "expose" dynamic: an emphasis on "protection" to reduce pain initially, and gradually shifting the emphasis to "exposure" to build resiliency over time. These phases are motivated by previous works of Cook and Purdam (2009)(4) and Fredericson and Weir (2005)(10), which suggest keeping lateral knee pain capped at 0-4/10 visual analog scale (VAS), either during the session or upon waking the next morning.

Figure 3: Example progression of rehabilitation for a runner with ITB compression pain

The goal: maintain as much capacity as possible while avoiding irritation. This is a challenge and often requires some trial and error while you learn what you can tolerate! Running may need to be temporarily ceased or greatly reduced and replaced with other equally challenging activities that do not irritate the ITB.

If uphill treadmill walking is irritating, regress to stationary cycling with the seat lowered could be attempted. A possible modification may be to lower the seat such that the knee is flexed to ~35deg at the bottom of the pedal stroke (avoiding the aforementioned impingement zone).

If stationary cycling is also aggravating, regress to swimming. The goal however, is always to move towards uphill walking, even when it's not tolerated initially.

Image 2: knee varus moment arm (MA) depicted by the dotted red line. The longer this line, the larger the moment arm and the more torque applied to the knee (and hip). Uphill treadmill walking reduces the length of the moment arm thereby reducing the energy storage and release demands of the ITB during the gait cycle.

Non-weight bearing ITB loading is initiated by progressing from A through to E above. A (basically just the Thomas Test used as an ITB excursion exercise), B (single leg bridge), C Non-weight bearing, progressive ITB and hip loading exercises are initiated in Stage 1. The ITB is loaded throughout Stage 1 via the Thomas exercise, which is really just the Thomas test used as a low-load ITB excursion exercise (Figure 4A). The Thomas exercise is then progressed to a single leg bridge (Figure 4B). Concurrent with the Thomas and single leg bridge exercises, the posterolateral hip musculature are progressively loaded (Figure 4 C-E). (20)  Multiple sets of isometric holds of 10 or fewer repetitions should be prescribed with adequate hold times and efforts that achieve near-muscular failure on the last couple of repetitions.

Click here for part 3 to read our final blog in this series!