This blog provides an update on the literature around the treatment of runners with ITB pain. It is not medical advice. If you have knee pain with running book in to physio here!

As we've said, there are two main stages for rehab: a pain dominant phase and a load dominant phase. Here, we look at the Load Dominant / "Expose" phase.

The runner transitions to the Load Dominant phase when s/he is able to descend stairs without pain.

The split squat progression (Figure 5) is the cornerstone of Stage 2. This exercise progression eccentrically and concentrically loads the relevant musculature and ITB with heavy, slow resistance training via 6-second repetitions. The split squat essentially combines the ITB excursion exercises and isolated hip strengthening of Stage 2 into a single exercise. It should be noted that strengthening alone will not address any running biomechanics that are thought to contribute to ITB pain in the runner;(25) instead, strengthening exercises should only be viewed as loading exercises that will enhance load tolerance of the targeted structures. In other words, err on the side of more load rather than “functional.”

Figure 5: Split-squat progression. Note: she is training her right hip flexors; her right foot is pushing off the bed to concentrically raise and eccentrically lower her body. The right hip extensors should also be trained afterwards by placing the right leg forward with bodyweight shifted over it. To progress the difficulty, weight may be added (compare A and D), additional sets/reps can be added, reps can be performed slowly (~3 seconds descent), and the table height can be increased (compare A and D).

A standard progression might start with 3 sets of 12 reps and progress to 6 sets of 6 reps with heavy weight that results in near-muscular failure at the last rep. In Stage 2, the split squat is performed 2-3x/week with incline treadmill walking continuing 3-7x/week. The split squat progression is done throughout Stages 2-5, with resistance progressed appropriately.

Plyometrics are added in Stage 3 in continued into Stage 4 to address the energy storage and release demands of the ITB but without the cumulative loading of running. This stage is short, generally just 1 week, and is used merely as a bridge between Stage 2 and Stage 4, where running is re-initiated. Resisted lateral skaters (Figure 6) are an excellent plyometric exercise due to the loads applied to the posterolateral hip musculature. 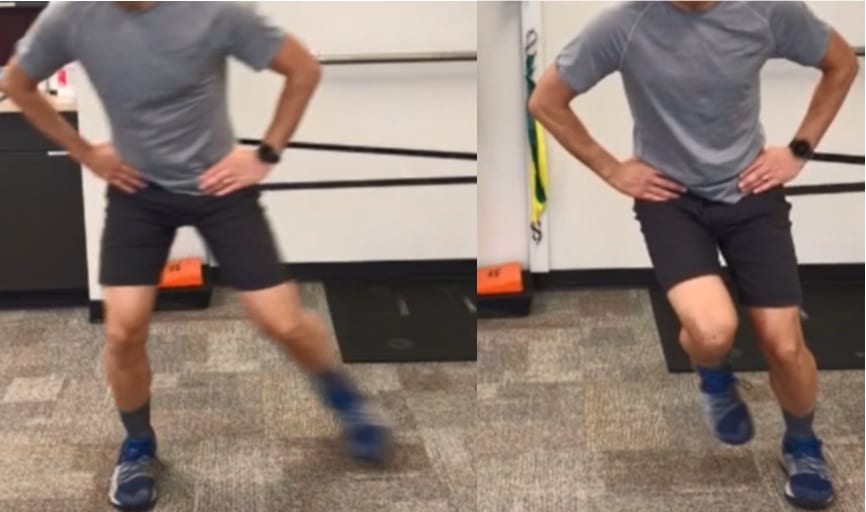 A return to running program is often used after completing stages 1-3 to reintroduce running loads in a graded manner. It is critical for the runner to view the return to running program as merely another form of “loading exercise." It is not back to fitness at this point, so do not do too much too soon! If you're worried about fitness, use challenging cross-training (e.g., stationary cycling intervals) to maintain aerobic fitness during the return to run process.

Some find running on a treadmill with a ~5% incline prior to running outside makes for a helpful transition. Nevertheless, key points in this stage are:

Figure 8: Runner with left ITB pain at baseline (A) and with (B) a 7.5% increase in running cadence over her preferred. Note the reduced crossover, reduced hip adduction, and pelvic drop in midstance. Feedback on cadence was provided with a Garmin GPS running watch (C).

In this "final" stage, the runner should continue to increase training volume in a reasonable manner. Downhill running and trail running are gradually added, if applicable to the runner. However, trail running and downhill running on separate days makes sense initially, before to adding them together in a single run. Finally, the runner would benefit from continued heavy slow resistance training (especially split squats), but should drop back to doing it just once a week as running volume increases.

Considering the high demands runners place on the ITB, adopting an active rehabilitation approach for ITB pain seems warranted. While reducing loads makes sense in the pain dominant stage, it is critical for the runner and clinician to work toward restoring the full capacity of the ITB and the runner through a progressive overload approach.