Resistance Training in the Elderly: Part 3

The elderly are, despite the common misconception of youth, not another species. Resistance training guidelines for young people are very much applicable to the elderly. Many healthy and relatively fit elderly people will not require programs that differ significantly from those for 20-40 year olds. For the frail elderly (those with signs of sarcopenia), however, a more specific program that prioritises activities of daily living seems appropriate. The use of a step-up, for example, would have a more direct transfer to stair walking than would the leg press or even a squat. Of course this doesn’t mean that you shouldn't squat (or leg press), in fact a combination of the two might maximise both hypertrophy and functional benefits. To enhance gait you should also consider that the knee extensors (quadriceps) and plantar flexors (calves) deteriorate faster with age than the hip extensors, so squats and leg presses should be performed in manner that maximises quadriceps activity (e.g. high bar for squats; feet low on the foot plate with the back rest declined for leg press). Moreover, a calf exercise seems appropriate and is probably of more value than a leg curl or back extension.

Importantly, your blood pressure (BP) may need to be considered. Minimising high BP may be necessary as a relatively high percentage of people in the 60+ age bracket have elevated resting BP and some arterial stiffness. You can minimise high BP by:

Here are some examples of the sorts of exercises that could be used in the resistance programs of the young and the elderly. None of them are mandatory and this isn't an exhaustive list; there are plenty of great exercises that aren't included. The way I like to educate patients is to say that we're cooking (throwing sensible ingredients together and seeing what works) not baking (following a rigid recipe). 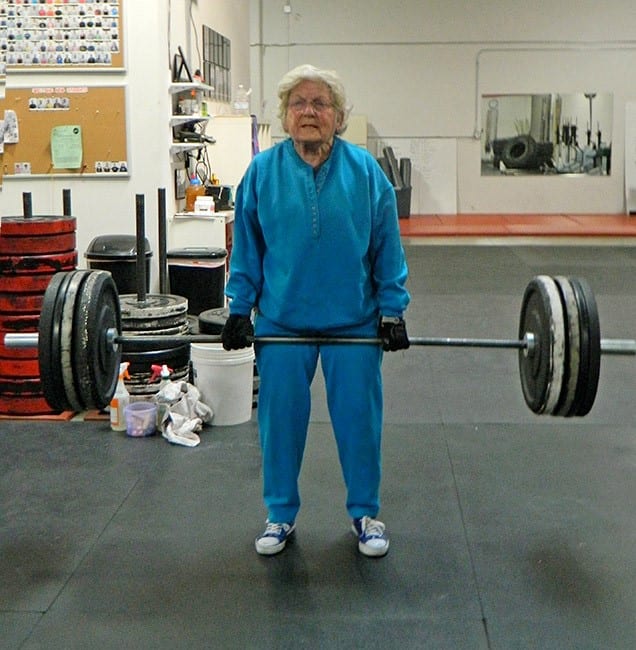 Jean, 82yo, with a new PR of 153kgs for the deadlift! One of my favourite pictures on the internet!

For the lower limb, the emphasis should be on anti-gravity muscles - think, quadriceps and calves. Moreover, a lot of these exercises will require some measure of balance. Some of you will be apprehensive about performing jumping activities (and it should be acknowledged that the very frail will not be able to leave earth). If this is you, simply performing the concentric part of the exercise as fast as you can will suffice. But if you can still jump safely (even if it just a few centimeters), you should! Use it or lose it.

The DB squat involves holding a single DB (by the plates at one end) between the legs. This is a good functional alternative to traditional barbell back squats as it avoids the discomfort associated with placing a heavy load across the shoulders while providing a model of how to safely lift items around the house. This and the traditional squat can be modified to include plantar-flexion at the end of the movement. Push-ups can be performed with the hands on a table or kitchen bench so they need not be too difficult even for the frail. The idea behind the use of body mass exercises is that they are more specific to activities of daily living – the push-up may be a component of getting up off the ground after a fall. Abdominal exercises should include those that tax the flexors and lateral flexors with the view to maintaining the ability to roll and sit up (an important pre-requisite to getting up off the ground or out of bed – in this sense the act of getting up from the ground will act as a positive training stimulus for some frailer folk).

Many of these exercises place significant compressive loads on bones that are prone to osteoporotic fractures such as the vertebral column, neck of the femur, the carpals, radius and humerus. You should recognise, however, that those who already have severe osteoporosis may come to harm if these sites are loaded excessively. Arthritic changes, common in the joints of the elderly, may limit exercise choice or the range of motion (ROM) that older lifters can move through. Modifying the ROM should be seen as preferable to abandoning the exercise completely.

The best time to consume protein is immediately before and immediately after resistance training. There are some studies that show even greater benefits for the elderly. Esmark and colleagues reported that taking a protein-carbohydrate supplement immediately after training resulted in significantly greater increases in muscle fibre cross-section than taking the same supplement 2 hours after training. This suggests that there may be a narrow "window of opportunity" for the elderly who should be encouraged to eat appropriately soon after, or even before ‘working out’ (though new evidence has challenged this, suggesting it's more of a "barn door" than a "narrow window").

We're serious about helping you live your best life now. Right now, you can book in for a FREE initial assessment. No hidden funnies, weird pyramid schemes, or quackery. Just a great chance for you to see how physiotherapy can help you move again. In fact, we're so serious, we even offer half-price treatment should you chose to pursue your tailored therapy, right in the very same session. Press the button below to quickly make an online booking. It's no fuss and super-simple, we promise.