This series focuses on a number of myths we often hear at Sycamore Health relating to physiotherapy and exercise. Our goal is not that you become discouraged from exercising, but rather that you train safely, effectively and often!

There are a lot of misconceptions when it comes to heavy strength training and running. We know there’s strong evidence that resistance training has a myriad of health benefits and reduces the risk of overuse injury in athletes by approximately 50% (Lauersen et al., 2014). Despite strong evidence of strength trainings utility for runners, many simply avoid lifting heavy things and instead just run more!

It’s commonly believed that the key to “fixing” poor running technique is to incorporate certain special exercises in the gym. Knee valgus (when the knee collapses inwards towards the midline – see picture), which can be controlled by the gluteal muscles, is sometimes observed in runners. When this knee valgus is “excessive” (whatever that means), a runner’s chance of certain injuries (e.g., patellofemoral pain, iliotibial pain) increases (2, 3). 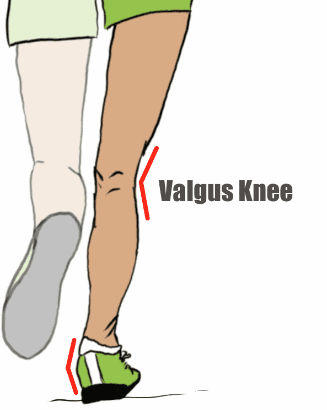 Some studies suggest that a structured running program that aims to retrain a runners gait can reduce hip adduction, but the focus of these programs is not on strengthening glutes, but rather on improving the coordination of the hip during running (5).

Next in this series: Running Myths Part 5: Runners Should Do "Functional" Exercises